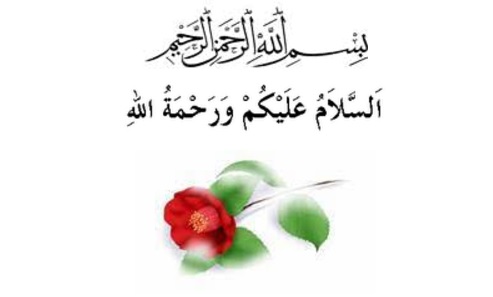 O You who believe!  Sayyidina Muhammad Ibn Abdullah – Rahmatul Liel Ala’meen Sallallahoo Alayhi Wasallam was not a god – he himself never ascribed any divinity to himself nor did his followers take him as a god; and yet his influence and popularity are simply breathtaking.

In a world of shifting moods and tempers, his hold over his Ummah is assured, there is no challenge to his leadership nor can the barriers of time and space confine his influence to a particular era. He rises above all and like the sun that never sets, he benefits all. What makes him so loved, so endearing and yet so powerful? He himself once delineated his role through a parable:

My parable, he said: [Bukhari]

“Is like that of a man who has kindled a fire. When its light spreads in the surrounding gloom,

cremated in spite of the efforts to save them. I strive to hold you

back from the fire, but you are falling headlong in it.”

From the moment of his advent into Yathrib he stands in the full blaze of day – the grandest of figures upon whom the light of history has ever shone. The minutest details of his life are carefully noted and handed down to posterity, to become crystallized, often against the spirit of his own teachings, which aimed at the perpetual growth of the human race.

As Syed Ameer Ali writes in The Spirit of Islam:

“We have seen this wonderful man as an orphan child who had never known a father’s love, bereft in infancy of a mother’s care, his earthly life so full of pathos, growing up from a thoughtful childhood to a still more thoughtful youth. His youth was as pure and true as his boyhood, his manhood as austere and devout as his youth.

His ear was ever open to the sorrows and sufferings of the weak and the poor; his heart ever full of sympathy and tenderness towards all of Almighty Allah’s creatures. He walks so humbly and so purely, that men turn around and point, there goes al-Amin, the true, the upright, the trustworthy, a faithful friend and companion, a devoted husband, and loving father.

Al-Amin, a thinker intent on the mysteries of life and death, on the responsibilities of human actions, the end and aim of human existence – he sets himself to the task of reclaiming and reforming not only a nation, but the whole world, with only one loving heart to comfort and solace him.

Baffled, he never falters; beaten, he never despairs. He struggles on with indomitable spirit to achieve the work assigned to him by Almighty Allah Azza Wajjal. His purity and nobleness of character, his intense and earnest belief in Almighty Allah Subhanahu Wata’ala’s Mercy bring a devoted heart; and when the moment of the severest trial comes, like the faithful mariner, he remains steadfast at his post until all his followers are safe, and then betakes himself to the hospitable shore: such we have seen him.”

Al Mustapha – The Beloved of Almighty Allah Rabbul Ala’meen, was a true ruler of human hearts, chief, lawyer and supreme magistrate, and yet without any self-exaltation, lowly and humble. His history henceforth merged in the history of the commonwealth of which he was the centre.

Rahmatul Liel Ala’meen – Sallallahoo Alayhi Wasallam was the Beloved of Almighty Allah Subhanahu Wata’ala who broke the fetters of Ignorance and Superstition and invited humanity to a servitude that released them from every other form of bondage. He restored to them the legitimate comforts of life from which they had deprived themselves under false ethical and spiritual notions.

His advent gave to humanity a new life, a new light, a new faith, a new warmth, a new society and a new culture. It ushered in a new era in human history making the commencement of the real mission of Man upon this Dunya. Viewed as such, his concern and his compassion like his prophetic intellect are awesome.

He does not want anyone to go astray and destroy his and her today as well as their tomorrows. It was his great love and concern for mankind that once his wife Hazrat Ayesha [Allah be pleased with her] heard him at night reciting only verse 118 of  Surah Al – Ma’idah  till the break of dawn:

“If You punish them lo! They are Your slaves O Allah, and

if you forgive them, lo! You, only You are the Mighty, the Wise.”

The Master can justly punish His servants for disobedience: no one can say to Him nay, for He is high above all. But if He chooses to forgive, He in His Wisdom sees things that we mortals cannot see. This is the limit of intercession that men of Almighty Allah Subhanahu Wata’ala can make on behalf of sinners. In a world dominated by emperors and “their majesties”, he – Sallallahoo Alayhi Wasallam is the only one bent upon destroying such icons and in the process does not build his own.

Like an ordinary person he would mend his shoes, milk the goats, darn his clothes, and do household work and all other chores. Yawning between Islam and Ignorance there was a chasm as deep and wide as it could be. Yet, under the inspired leadership of the Nabee Sallallahoo Alayhi Wasallam, the world jumped across it and passed from Ignorance to Islam with an alacrity that is without a parallel in history.

So common indeed, and yet power cannot seduce him, adulation of the masses cannot turn him into a narcissist, knowledge cannot leave him cold and conceited, his enormous public duties cannot detract him from his familial obligations. His are the measured steps toward life. It is a great balancing act under great strain, but he does it with a finesse that has no parallel in history. Aware of the great difficulties in his path he often supplicates:

knowledge that confers no benefit; from a heart that does not humble itself;

from an ego that finds no contentment; and from

a supplication that is not heard.”

He gives his followers “Sawa as-Sabil” – from glory to comfort, ascendance over others to the success in the Aghirah; and yet he asks for nothing in return. No glorification – not even over other prophets, nor kingship even when he can become king of kings, no status of his, even when his spiritual powers are manifest and people adore him. He just asks for their prayers and benediction.

The Nabee Sallallahoo Alayhi Wasallam applied the right key to the problem of human nature. It was the problem that had defied solution at the hands of all reformers before him. He began by entreating men to believe in Almighty Allah Subhanahu Wata’ala and to bring down all false gods from the pedestal of Divinity.

there is no god but Allah and you shall prosper.”

This thunderous proclamation caused a stir in the ranks of paganism. In an instant paganism

was up in arms against this simple human truth. We are reminded in verse 6 of Surah Sad:

“And the leaders among them go away (impatiently),

saying: Walk you away, and remain constant to your

gods! For this is truly a thing designed (against you).”

The ghastly deeds of crime and cruelty perpetrated upon the Muslims by the enemies of Truth are preserved in the pages of history. They show that Islam had found its mark. It had struck at the very root of unbelief and Kufr. The citadel of Darkness had been stormed, and the beleaguered forces sallied forth to fight to the bitter end. But the Nabee Sallallahoo Alayhi Wasallam wavered not. He plainly told his uncle who had raised him since his childhood:

“O my uncle, if they placed the sun on my right hand and the moon

on my left hand to force me to renounce my work, verily

I will not desist until Almighty Allah makes manifest

His work or I perish in the effort.”

He visited the sick, followed every bier he met, accepted the invitation of a slave to dinner, mended his own clothes, milked his goats, and waited upon himself, relates summarily another tradition. He never withdrew his hand from another’s palm, and turned not before the other had turned.

His hand was the most generous, his breast the most courageous, his tongue the most truthful; he was the most faithful protector of those he protected; the sweetest and most agreeable in conversation. Those who saw him were filled with reverence; those who came near him loved him; those who described him would say: “I have never seen his like”. He was of great taciturnity; and when he spoke, he spoke with emphasis and deliberation, and no one could forget whatever he said.

Modesty and kindness, patience, self-denial, and generosity pervaded his conduct, and riveted the affections of all those around him. He showed sympathy and tenderness to the bereaved and afflicted and he shared his food even in times of scarcity. He was sedulously solicitous for the personal comfort of those around him and he would stop in the street listening to their sorrows and would go to the homes to console the afflicted and to comfort their broken hearts.

He never sat down to a meal without first invoking a blessing, and never rose without uttering a thanksgiving. The Beloved of Almighty Allah was extremely simple in his habits, his mode of life, his dress and his personal belongings retained the character of simplicity. Even on his deathbed, his mind is preoccupied with peoples’ proclivity to create gods out of common clay. “The People of the Book are in manifest error for they turned the graves of their prophets into places of worship.”

A man and a prophet indeed – it is his genuineness in these roles that his hold on his kind of people is assured. The rest need not follow him. The biography of no other human being is so well preserved as that of our Beloved Nabee Muhammad Sallallahoo Alayhi Wasallam. In each and ever matter of our life we can seek the guidance of our Beloved Nabee Sallallahoo Alayhi Wasallam and take a lesson from his life example. That is why there is no need of any other prophet after him for so declares Almighty Allah Subhanahu Wata’ala in verse 40 of Surah Al-Ahzab:

“Muhammad is not the father of any of you men, but (he is) the Messenger of Allah,

and the Seal of the Prophets: And Almighty Allah has full knowledge of all things.”

“Allah and His Angels, send Blessings on the Prophet: O you who

believe! Send ye blessings on him and salute him with respect.”

Almighty Allah Azza Wajjal and His Angels honour and bless the Nabee Sallallahoo Alayhi Wasallam. We are asked to honour and bless him all the more because he took it upon himself to suffer the sorrows and afflictions of this life in order to guide us to Almighty Allah’s Mercy and the highest inner Life.

Beloved Ummah of Islam! Let us study, not as Muslim enthusiasts but as students of human affairs, the character, the scope and the influence of this great Revolution upon the destinies of the human race. O Ya Allah Rabbul Ala’meen! Bless Your Beloved Nabee Sallallahoo Alayhi Wasallam the pure and chaste one, the immaculate one, the one gifted with glorious miracles and confounding impact, and the one endowed with the virtues of absolute exaltedness.

“And Almighty knows best and to Him belongs all Praise.”

It is indeed a world of knowledge to know that which we know not!
The Wisdom and Plan of Allah are beyond all Praise:

And Mercy and Truth proceed from Him, and there
is no other – none – besides Him.

Please be advised that you are welcomed to use and share my
Khutbah’s for propagation purposes without my prior consent.