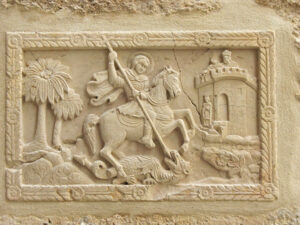 Saint George was born in Turkey to a Turkish father and Palestinian mother. He lived in the Middle East and died at the hands of the Romans who persecuted him because of his faith.

Yes. The patron Saint of England is half Turkish and half Palestinian. He has become an emblem of the English nation despite his “foreign blood” and yet he is the perfect patron for Britain.

St George was born in Cappadocia, in modern day Turkey to an army soldier and a mother from Lydda, now known as Lod in Palestine. After his father’s death, George’s mother took her infant son back to her home town of Lydda where a young George joined the Roman army,  like his father before him and quickly rose through the ranks. When ordered by a pagan ruler, the Emperor Diocletian, to pay tribute to Roman gods, he refused.

He was imprisoned, tortured and eventually killed, on April 23, 303AD, after he protested against the Roman Emperor’s campaign of oppression and persecution against Christian believers. The image of George slaying a dragon, according to some, is actually symbolic of him defeating the evil forces, and remaining true to his faith.

Muslims across the Middle East have traditionally associated George with Al-Khidr, (literally “the Green One”) who is a wise figure characterised in the Quran as, amongst other things, a helper to the poor and vulnerable. Al Khidr was a mystical boat companion of Moses, and even though Moses’ time was centuries earlier, the linking of George to this Quranic personality has held the imagination, and the similarity of title has meant the two figures have become entwined. To this day, St George’s shrine at Beit Jala receives visits from both Christian and Muslim.

From this rather grisly end he has become a hero and a national icon for many. Today he is celebrated the all over the world. In England, he is celebrated on 23rd April. A day, like the man himself, borrowed from the East. In Turkey, 23rd April is called the Feast of Lydda, observed throughout Turkey as the beginning of spring.

According to tradition, George often prayed near the Temple Mount in Jerusalem where an elongated mosque named Qubbat Al-Khidr is dedicated to him. Located within the terraced site of the Dome of the Rock, George’s shrine in Palestine. Many other sites throughout the Islamic world resound with Al-Khidr, one of the most notable being the great Beirut mosque of Al-Khidr that lies close to where George legendarily slayed the dragon.

Anthony Cooney, author of the books, The Story of St George and Saint George: Knight of Lydda, commented on George as a “man for all people”, not being confined to one country or a single cause. Cooney finds that George’s appeal to Muslims is not something that should be treated as strange. “St George is an ecumenical saint. He is not just for one nation; he is patron saint of many, making him pretty universal. One main reason for Muslims revering him over time is that he was martyred for refusing to give divine honours to idols, and as such is delivered up as a staunch monotheist.” Many accounts have George destroying idols in the temple of Apollo, a story that resounds remarkably with the account of Abraham smashing the idols in his time. Although there are some voices of dissent regarding his martyrdom status, according to Cooney there is a “tremendous amount of evidence”, which can leave us in no doubt of the years of torture he endured and his subsequent death.

The patronage of St George has not always been used for such celebratory purposes. Armies in the Crusades killed tens of thousands under his banner. A Church in Devon has an image of him spearing Saracens. And in 1975, the League of St George was founded. It is an organisation hostile to immigrants and one that warned of the ‘threat’ posed to Britain’s national identity from immigration. Britain’s far right politicians use the flag of St George to champion their call for an England for the “English”. Little could be more ironic.

The truth is, he was martyred in Palestine because he was a monotheist. It is clear therefore that any true follower of St. George should be opposed to the race and religious discrimination which certain members of Britain’s far right so blatantly display.

The original version of this article can be found at https://iknowbro.com/truth/who-was-saint-george-really-the-truth-may-surprise-you