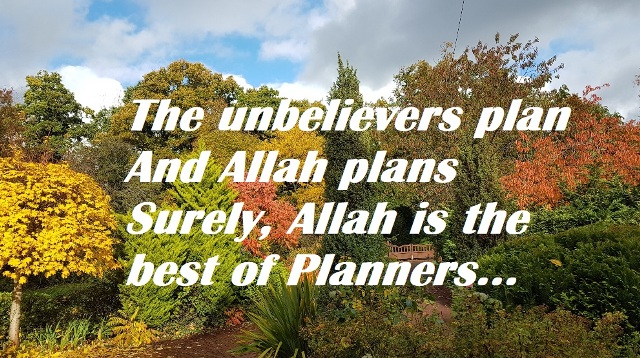 Khutbah: Allah is the best of Planners

All Praise is due to Alláh, We praise Him and we seek help from Him. We ask forgiveness from Him. We repent to Him; and we seek refuge in Him from our own evils and our own bad deeds. Anyone who is guided by Alláh is indeed guided; and anyone who has been left astray, will find no one to guide him. I bear witness that there is no god but Alláh, the Only One without any partner; and I bear witness that Muhammad ﷺ, peace and blessings on him, is His servant, and His messenger.

“O mankind! Show reverence towards your Guardian-Lord Who created you from a single person, created, of like nature, his mate and from the two of them scattered (like seeds) countless men and women;― Be conscious of Allah, through Whom ye demand your mutual (rights) and (show reverence towards) the wombs (that bore you): for surely, Allah ever watches over you.”

The Noble Quran reminds us that:

The US elections are now over, and the world is breathing a huge, collective sigh of relief. Muslims are especially hopeful, now that the President-Elect has promised to end the ‘Muslim Ban’ on his day one in office. We hope and pray that the new leadership will also use America’s influence to stop the persecution of Muslims in China, India, Myanmar and other parts of the world. We also hope and pray that other Presidents, like Macron in France, will behave more responsibly.

The ‘Islamophobia Industry’ both inside and outside the US, is well funded and highly organised. Muslims will have to work hard with our fellow citizens to resist it. We must continue to promote respect and appreciation of our diverse human family. There is a mountain to climb, dealing with the suspicion, fear and hate stirred up over the years. Those who hate us see Islam as the enemy. We Muslims know that Islam is not the enemy, but the saviour of humankind. But we won’t convince anyone if our bad behaviour simply confirms their prejudices.

My dear sisters and brothers, our task ahead is very clear. We must show others, through our words and actions that Islam is the best way of living. True Muslims are really the best of humanity.

“You are the best community raised for humanity. You encourage the good, you forbid the bad, and you believe in Allah.” (Quran 3:110)

The Holy Quran invites us to respond to Allah’s invitation in Sura Al-Imran (3:104):

“Let there arise from you a band of people who enjoin what is right and forbid what is wrong. They will be the successful ones.”

It’s a simple formula. Rise up and do good. Resist evil. This is not a time for us to hide away and hope for better things to come. This is a time for us to actively help others, in private and in public, to dispel their fear and hate.

My dear brothers and sisters,

If we are grateful to Allah in the good times, Allah will not abandon us in the hard times. In a well known Hadith, Prophet Muhammad ﷺ said:

We should never be disheartened or driven to despair when hardship comes our way. Trust Allah. History is safe in Allah’s hands. We are simply being tested to see whether we truly have faith and trust in Allah.

“O you who believe, seek Allah’s help with patience, perseverance and prayer, for truly, Allah is with those who patiently persevere.”

Donald Trump has gone, but his toxic legacy remains. The suspicion,  the fear and hate towards Muslims has emboldened other leaders from China, India and Europe. But Allah’s religion will never be defeated. Despite their plotting and planning, Islam will survive and spread. That is Allah’s promise. Read Quran 8.30:

“They plot and plan, and Allah plans. Allah is the best of planners.”

We can find even more reassurance in Sura Al-Anfal (Quran 8:30):

“The (disbelievers)  wish to extinguish Allah’s light with their mouths, but Allah will perfect His light, even though they detest it.”

So there we have it, my dear sisters and brothers. Keep calm, and carry on. Ignore the noise out there. Just like every other crisis in our 1,400 year history, this one will also pass. And Islam will be stronger, not weaker, for it. Let us continue to engage in good works alongside our many friends and neighbours in the wider community. Islam will prevail. Truth will triumph. Allah is firmly in control.of every part of His creation. Instead of weakening Islam, our enemies are driving ever more and more people into the Ummah of Muhammad ﷺ