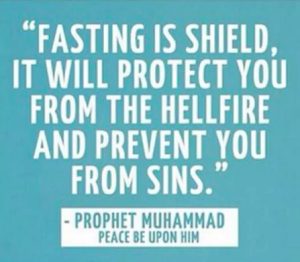 The Reality of Fasting

Brothers in Islam: Allah swt says in Surah Baqarah (2:185): “The month of Ramadhan [is that] in which was revealed the Qur’an, a guidance for the people and clear proof of guidance and criterion. So whoever sights [the new moon of] the month, let him fast it; and whoever is ill or on a journey – then an equal number of other days. Allah intends for you ease and does not intend for you hardship and [wants] for you to complete the period and to glorify Allah for having guided you so that you may be grateful to Him.”

When the crescent (moon) of the noble month was sighted, marking the start of a blessed season, the Prophet (sas) used to give glad tidings to his companions upon the arrival of this month. He would say, “O Believers! Therefore, glad tidings to you for the month of Ramadan, the month in which Allah ordained fasting and revealed the Qur’an. He made this month a season of worship and hard work, a season of goodness and blessings. He made it a time of action and striving for four things: Fasting, Qur’an, Worship, and other Righteous deeds – these are the most obvious gifts and features of this month.”

There are many other sources for evil that still remain. One of them is the human soul, which is naturally inclined towards evil and accompanies one at all times. Human devils are another reason for immorality in addition to man’s own lusts and desires. Yet another reason is that the remaining soldiers of the devils that do not get chained continue to misguide people. Nevertheless, all of these reasons and causes have a lesser effect over fasting people because fasting bestows upon them a certain blessing.

أيها المؤمنون:  This is the value of Ramadan, the month of fasting. Allah ordained fasting during this month whereby people refrain from food, drink and conjugal relations from dawn until sunset. When the sun sets, a fasting person can eat and drink and have marital relations. The nations that came before us were not allowed to touch their spouses, even at night, and if a person from them fell asleep before he had the chance to eat or drink anything, then it was forbidden for him to eat or drink after that; he had to continue fasting until the end of the next day.

However, Allah has made it easy for this Nation. To demonstrate to this Nation His favours upon it, Allah says: “It has been made permissible for you the night preceding fasting to go to your women (for sexual relations)” (Al-Baqarah: 187). In other words, this means that this was not lawful for the people before you but now it is lawful for you, O Nation of Muhammad (sas).

It is from Allah’s mercy that He made all these permissible, thus releasing the believers from the heavy burdens that were upon the previous nations. Allah (swt) says in Surah Baqarah:185, “… Allah intends for you ease and does not intend for you hardship …”

Of the signs of ease of this religion and the mercy that Muhammad (sas) came with is that the ill person and the traveller can avoid his fast and make it up at a later time after Ramadan. Also, the elderly who cannot bear fasting, as well as people who have no hope of a cure (i.e. the chronically ill), can feed the needy and they do not have to make up for their missed fasting. Please note, it is not righteous to fast while travelling, nor is it better for the ill to fast if it is difficult for them to do so. In these cases, they are to make use of the permission that Allah has furnished them with, because He likes it when people take heed of the mercy that He has endowed.

Brothers in Islam: Know that fasting is a protection from wrongdoing. This month is an opportunity for you to purify yourselves and release yourselves from the effects of sins, so take advantage of it. During Ramadan, a Muslim has fewer burdens as his desires are diminished and he acquires more goodness from being involved in fasting; one can rid himself of bad habits, such as overdoing matters which are lawful, such as over-eating, talking too much and being over indulgent in sexual relations with one’s spouse; we must stop the awful habit of going to extremes in fulfilling these desires.

Abu Huraira, (ra), reported that the Prophet (sas) said: “Fasting is a shield (protection), so when one of you fasts, let him not touch his wife (for sexual relations), and let him not badmouth anyone; and if someone fights him or upsets him, let him say, ‘I am fasting, I am fasting.’ I swear by the One in Whose Hand my soul is! The smell of the mouth of a fasting person is better to Allah than the smell of musk.”

Also, Allah says as reported in a Hadith Qudsi: “He left eating and drinking and his desires for My sake. Fasting is for Me and I give reward for it – one blessing (for fasting) is multiplied ten times.” (Bukhari)

Some people fail to understand the reality of fasting. They refrain from eating and drinking in the daytime but do not abstain from sin or oppression. They continue their practices as usual. Or if they do stop in the daytime, they continue with their normal routine as soon as they break the fast. They spend their mornings hungry and thirsty and their evenings are full of sin and evil. They spend the whole night watching television with their wives and children. Others refrain from food during the daytime, and after sunset, they eat all night long to make up for the food they missed. Therefore, fasting is nothing for such people except a change in the times of eating – for they eat during the night rather than the day. When night comes, all kinds of foods are put forth for them to consume – one kind of food is not sufficient for these people – and they stuff their stomachs with all these various types. It is as if these people have never heard of the saying of the Prophet (sas): “The believer eats in one stomach, and the disbeliever and the hypocrite eats in seven.” (Bukhari and Muslim)

This saying of the Prophet (sas) means that a believer can eat less and control his desires more, since he does not eat to enjoy nor to fulfil a desire, but rather to stop hunger and become stronger so that he can worship Allah.

أيها المؤمنون:  Let this month be an opportunity that we take full advantage of. Let us get used to these customs – the customs of the Prophet (sas). Let us get rid of the habit of overeating. Let this month be a chance to purify ourselves and become elevated from lusts, desires, and trivialities that are of no real value. Let us elevate our souls to the heavens with faith – we can elevate them from the pleasures of this world to the pleasures of the world to come.