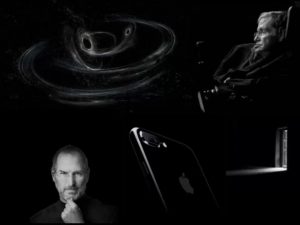 In 1985, I started my degree in Astrophysics up in the north of England, at one of the only two places in the country which offered this course. It was more or less what I had set my heart on studying ever since reading Isaac Asimov’s, The Collapsing Universe: The Story of the Black Holes (1977) and Carl Sagan’s breath-taking book (and TV series), Cosmos(1980). Soul stirred, and heart and mind thoroughly infused with enchantment, I was determined to make engaging the wondrous mysteries of the cosmos my calling.

It was also in 1985 that a rumour went round among some of the students on the course that Stephen Hawking – his body now ravaged by motor neurone disease, his speech now slurred so as to barely be intelligible, but who had already outlived the predictions of his doctors by more than fifteen years – had recently been hospitalised with a life-threatening bout of pneumonia. The doctors had even considered pulling the plug on his life-support machine. It was then that a discussion began about the theoretical brilliance of Hawking. In fact, it wasn’t a discussion as much as it was one student’s passionate recollection of what he had thus far accomplished: his attempts to unify general relativity with quantum mechanics; his idea that the Big-Bang may have begun with a singularity1– the same sort of singularities that supposedly lie at the centre of black holes; his thesis that black holes may not devour everything that falls into them, but they could leak radiation (later called “Hawking radiation”) by which they would “shine”. She was, I think, a third year student, and some of what she said flew over my head at the time. I remember this because of what she said at the end of all this. Apparently, she said, in a tone that was now quite subdued, Hawking was working on publishing a book that would explain all this incredible physics. What’s more, she said, the book is being aimed, not at scientists, but at a mass market. To be sure, I was beyond euphoric!

A Brief History of Time came out in 1988. Using minimal technical jargon, it was a thrilling book and an instant international bestseller. It swiftly became a modern classic, turning Hawking into an iconic celebrity, a household name as well as the most famous scientist in modern history. In spite of being wheelchair-bound or not being able to speak save by means of a speech synthesiser, Hawking continued to push the boundaries of cosmology and theoretical physics up till his death two weeks ago. His wit, grit, charisma, and good writing in which he unravelled for us the universe’s cutting-edge mysteries, will continue to enthral generations of readers; while his intuitive leaps and research will continue to keep scientists busy for decades to come. If people now talk about the Big-Bang and black holes over dinner, then the late Stephen Hawking has had a large part to play in this. Such is his inspirational and intellectual legacy.

Oftentimes, whenever a non-Muslim personality who has ostensibly brought about much good to the human situation passes away, many Muslims raise the age-old question: what is the ultimate fate of “good” non-Muslims in the afterlife? The news of Hawking’s death seems to have aggravated the matter. So let me recount some staple Islamic theology – in abstract, at least – to address the question: (To read more, please click here)