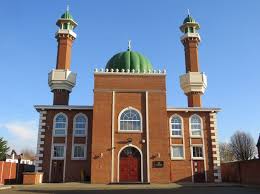 Welcome to our Mosque  Open Day

(time to read: under 5 minutes)

Honourable and respected guests, my dear friends, I greet you with the greeting words of Paradise,

‘Salaam’ is a very important word. It means “Peace.” And from the same word comes “Islam”, the “Way of Peace”. And “Muslim,” “one who follows the Way of Peace, and one who is completely at peace, inwardly and outwardly.”

Being at peace, both inwardly and outwardly means that you have complete faith and trust in your generous Life-Giver. Therefore, your total personality, your body, your mind, heart and soul are in perfect harmony. You are in complete equilibrium at all times, and no outside events can unsettle you or distress you. This is what it really means to be a Muslim in the truest sense of the word.

So much for the theory, but I’m sure some of you might ask, “What about the practice? What’s happening out there with all the war and violence? Why all the bombings and terror? Why is there such a big difference between the teachings of Islam and how some Muslims behave?”

Firstly, I must say this: The causes are varied, but the consequences are deadly. In fact, most of the victims of violence around the world are  actually Muslims themselves.

So, please don’t judge all of us by the behaviour of some of us, just as we shouldn’t judge all of you by the worst behaviour of a small minority in your community. There’s good and bad in every group. There will always be people who only know enough about their religion to hate others. They don’t know enough to love. And the bedrock of every religion is love. Love your God, love your neighbours and love God’s creation. Hate comes from ignorance. Ignorance is a dangerous thing.

“A little learning is a dangerous thing.

Drink deep, or taste not the Pierian Spring:

There shallow draughts intoxicate the brain,

And drinking largely sobers us again!”

It’s this ignorance about true faith that fuels so much mischief and bloodshed today.

My dear friends; some Muslims, and their extreme right-wing enemies, misquote the Quran in order to spread fear and terror. Don’t be fooled by this! It’s nothing new! Other religions also have the same problem.

I was born in South Africa, and for the first half of my life I lived under a brutal racist regime known as Apartheid. To remain in power, this regime spread fear and hatred of black people (in Afrikaans it was called “die Swart-Gevaar, “(The Black Danger).

The official Dutch Reformed Church of South Africa even misquoted the Bible in supporting Apartheid. They tried to prove that God gave whites the divine right to rule over blacks.

So you see, this is how mischief makers misquote Scripture to justify their actions! They use what you might call “The Guantanamo Method” of interpreting God’s Word. That’s when you take a verse from a holy book, completely out of its usual context and meaning. Then you torture it so much that you get it to say just about anything you want it to say!

But as educated people, you and I mustn’t allow ourselves to be fooled so easily. We know that real Muslims, just like real Christians, real Sikhs and real Hindus, Buddhists, Humanists and others, all observe the Golden Rule, the Ethic of Reciprocity, which says “Do unto others as you would like them to do unto you.” This is the basic moral principle that connects every major religion and belief system.

On the outside all religions are different, but the inner core is the same: Worship God alone, and be a good caretaker of all God’s creatures. .

Whenever we treat each other with respect, we also show a courtesy to God. When we hate, abuse and degrade others, then we also dehumanise ourselves. We also lose something of our own humanity in the process.

Dear friends, remember that Islamophobia didn’t begin by chance. It’s an industry. It’s big business. It wins votes to gain access to power. Millions are spent fostering hatred on Muslims. Fear and insecurity are powerful weapons of control. Someone even invented terms like ‘Islamic Terrorist’ and ‘Muslim Extremist’ which are not just misleading and offensive. They also make no sense: they are oxymorons: It’s like saying “a peaceful warmonger” or “a satanic angel.” These are crude distortions of language, utter nonsense.They have no purpose other than to divide, marginalise, victimise and control.

Those who seek to divide us and exploit our fears and prejudice must not be allowed to succeed. That’s why you’re here today.

Your visit to our mosque will be an all too brief encounter with local Muslims. I hope it will be the start of a long and happy relationship, based on mutual respect and trust. Whatever you might have known about Islam and Muslims when you arrived, I hope that when you leave, you will feel better informed.

Please don’t hesitate to ask any questions, even if you think they might be a bit awkward or sensitive. We are here on the basis of mutual respect and enquiry. This may be a rare opportunity for you to ask the questions that really bother you. We may not have all the answers, but we’ll do our best, and if needed, we’ll go back and do some homework!

Thank you for listening so patiently.

As-salaamu’alaykum!   Peace be with you!