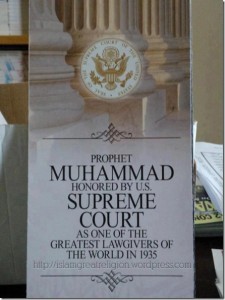 In 1978, Michael M. Hart an American Astrophysicist and author of The 100: A Ranking of the Most Influential Persons in History ranked Prophet Muhammad  as the most influential person in history ahead of great historical figures like Isaac Newton (second), Jesus (third) and Buddha (fourth).

‘My choice of Muhammad to lead the list of the world’s most influential persons may surprise some readers and may be questioned by others, but he was the only man in history who was supremely successful on both the religious and secular levels. Of humble origins, Muhammad founded and promulgated one of the world’s great religions, and became an immensely effective political leader. Today, thirteen centuries after his death, his influence is still powerful and pervasive.’

‘How, then, is one to assess the overall impact of Muhammad on human history? Like all religions, Islam exerts an enormous influence upon the lives of its followers. It is for this reason that the founders of the world’s great religions all figure prominently in this book. Since there are roughly twice as many Christians as Moslems in the world, it may initially seem strange that Muhammad has been ranked higher than Jesus. There are two principal reasons for that decision. First, Muhammad played a far more important role in the development of Islam than Jesus did in the development of Christianity. Although Jesus was responsible for the main ethical and moral precepts of Christianity (insofar as these differed from Judaism), St. Paul was the main developer of Christian theology, its principal proselytizer, and the author of a large portion of the New Testament. Muhammad, however, was responsible for both the theology of Islam and its main ethical and moral principles. In addition, he played the key role in proselytizing the new faith, and in establishing the religious practices of Islam.’

Whilst many are aware of Michael Hart’s research and findings what is not commonly known is the impact of Muhammad on legislation and more surprisingly that he is in fact honored by the U.S Supreme Court as one of the greatest lawgiver of the world in 1935. This aspect of the Prophet Muhammad is discussed in the featured article by Abdul Malik Mujahid.

Prophet Muhammad Honored By the U.S. Supreme Court  In 1935 As One Of The Greatest Lawgivers Of The World

As the United States Supreme Court judges sit in their chamber, to their right, front, and the left sides are friezes depicting the 18 greatest lawgivers of the world.

The second frieze to the right features a person holding a copy of the Quran, the Islamic holy book. It is intended to recognize Prophet Muhammad as one of the greatest lawgivers in the world, along with Moses, Solomon, Confucius, and Hammurabi, among others.

Here is what the Supreme Court’s website says about this frieze:

Muhammad (c. 570 – 632) The Prophet of Islam. He is depicted holding the Qur’an. The Qur’an provides the primary source of Islamic Law. Prophet Muhammad’s teachings explain and implement Qur’anic principles. The figure above is a well-intentioned attempt by the sculptor, Adolph Weinman, to honor Muhammad, and it bears no resemblance to Muhammad. Muslims generally have a strong aversion to sculptured or pictured representations of their Prophet.

In the year in which the frieze of Prophet Muhammad was erected, Franklin D. Roosevelt was president, and Charles Evans Hughes was the Chief Justice. It is not known how the court deliberated on this architectural contribution. No one at that time thought it inappropriate to include Prophet Muhammad as one of the greatest lawgivers of the world at the chambers of the United States Supreme Court. This was despite the fact that American society at that time was not as diverse as it is today. Women had just acquired the right to vote, and Japanese-Americans were about to be sent to concentration camps.

While the learned people in our country knew of the contribution of Prophet Muhammad, our neighbors today are given regular doses of misinformation about the Prophet and Sharia, the path of the Prophet, more commonly described as Islamic law.

Prophet Muhammad envisioned a just and peaceful society. With a mass peace movement, he achieved this goal during his life. He hated war and always preferred a peace treaty with his opponents, even if it was not favorable to his and his followers’ interests. He established his first peace sanctuary in the city of Madinah without any war whatsoever. While he did fight to defend that peace sanctuary, it is critical to note that the total time of actual fighting defending his people was not more than six days in his life of 63 years. He struggled to secure a peace that ensured justice and liberation for all people, especially for those most marginalized and oppressed.

Here are some of the Prophet’s notable contributions:

o   Moral behavior: personal cleanliness; emphasis on preservation and nourishment of all life forms, including plants and animals; rituals and spirituality of prayers; fasting and charity; righteous conduct and good deeds; and rights of parents, children, spouses, and neighbors.

o    Interpersonal relations: teaching to enhance human relations and to avoid breaking relationships; encouraging mutual consultation in all affairs; prohibiting bigotry and racism; and emphasizing kindness and hospitality toward others, especially the weak and the poor.

o    Financial guidelines: encouraging charity, rights of the poor, respect for workers, and rejection of exploitation; and circulation of wealth among all classes.

Why Muslims often demand Sharia in the Muslim World

In the Muslim world, many Muslims are sick and tired of their corrupt leaders. As such, they demand Sharia, envisioning a return to a just and peaceful system like the time when a caliph would submit himself without any immunity to a judge on an equal footing with his accuser. The United Nations gives all nations the right to self-determination. That is how even in the U.S.-brokered constitutions of Afghanistan and Iraq there is importance given to Sharia principles.

Unfortunately, the brutal and often biased implementation of criminal law in some Muslim countries has given Sharia a bad name. The Prophet would be horrified to see this merciless brutality in the name of Islam by some Muslims.

It is against Sharia to impose Sharia on anyone!

Almost all the Sharia with which Muslim Americans deal relates to personal religious life, ethics, morality, and human relationships. Practicing Muslims live Sharia every day as they pray, fast, eat Halal (permissible in Islam) food, practice charity, raise families, and serve communities. Sharia is like Halacha, which is practiced by Jews in America. Jews in America even operate Jewish courts in the U.S., called Beth Din. Muslim Americans do not operate any such courts.

Muslim Americans are subject to U.S. laws, just like any other citizens. No Muslim has called for the replacement of the U.S. Constitution with Sharia. Sharia is neither a constitution nor is it all law. It is actually against Sharia to impose Sharia on anyone. Further, Sharia only applies to Muslims, not to non-Muslims.

Muslims have been demanding equal protection under the U.S. Constitution since their rights are regularly violated in the current Islamophobic environment in which we are living, where Muslims are continuously targeted and subjected to bigotry and prejudice.

America’s Founding Fathers were wise people. Today’s Islamophobes can learn a great deal from them. In the Treaty of Peace and Friendship (1796) between the United States and Tripoli they stated:

“As the government of the United States of America is not in any sense founded on the Christian Religion, as it has in itself no character of enmity against the laws, religion or tranquility of Musselmen (Muslims)…”

Please also read Rose Wilder Lane’s Discovery of Freedom. She is the daughter of Laura Ingalls Wilder, of Little House on the Prairie fame. She considered Prophet Muhammad, Prophet Abraham, and the American Revolution to be the three major sources of freedom in the world.

Muhammad: A Prophet For Our Time, by Karen Armstrong, published by HarperCollins

Muhammad: His Life Based on the Earliest Sources, by Martin Lings, published by Inner Traditions