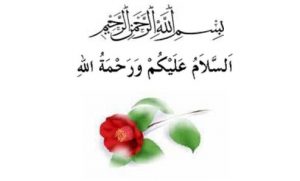 “Oo see kum Ibad’allah Bi Taqwa’llah”
Wa Ba’d:
Beloved People of Imaan!
The Shortest Distance between a Problem and its Solution
is the Distance between your Knees and the Floor.
The one who kneels to Almighty Allah
can stand up to Anything.

Alal Muslimeena Jami’ah! We are living in an age of anxiety and restlessness. A dramatic change is imperceptibly overtaking the world. The old order is rapidly disintegrating and the world is waiting for the new order. History tells us that such ages of restlessness have also been periods of birth for new movements and cultures. The world is in a grip of great tension and is awaiting the twenty-first renaissance of man.

A most significant feature of our present era is the re-awakening of a slumbering Ummah and the widespread trend of Islamic revival. After years of stagnation the world of Islam is rising up from its stupor and a new horizon, a new life, a new feeling of unity and a new feeling of justice, brotherhood, freedom and human dignity has been infused into the Muslim Ummah all over the world. Almighty Allah in His Infinite Mercy and Bounty declares in verses 1 to 3 in Surahtul Al Nasr:

“When comes the Help of Allah, and Victory, And thou dost
see the people enter Allah’s Religion in crowds, Celebrate the
Praises of Almighty Allah, and pray for His Forgiveness;
for He is Oft-Returning (in Grace and Mercy).”

Beloved People of Imaan! This current trend of Islamic revival is visible throughout the world and has within it the possibilities of becoming the harbinger of a new age. But this revivalist trend can become the messenger of a New Age, a New Beginning and a New Era only if it is accompanied by an intellectual revolution – a thorough appraisal of the intellectual and cultural heritage of Islam and its representation to the world in the language of today.

The future of Islam is the future of humanity, and if humanity has any future that I believe with all my heart that it has, there is a great and bright future in store for Islam. The spiritual battle that the Muslims are fighting today is not a losing battle, because if the Muslims, for any reason, lose their spiritual battle, humanity will suffer irreparable losses. We are reminded in verse 19 of Surahtul Al Hadid:

“And those who believe in Allah and His Messengers –
They are the Sincere (Lovers of Truth) and the Witnesses
(who testify), In the eyes of their Rabb: They shall have
their Reward and their Light.”

Alal Muslimeena Jami’ah! The Muslim Ummah have very good reasons to believe that their Book, the Most Glorious Qur’an, is the Master Book of Revelation and the Standard of Religious Truth. Muslims believe that Islam has come to reaffirm the Eternal Divine Message and settle the past religious disputes so that mankind may embark upon creative constructive activities in all walks of life. The does not mean that Muslims set themselves apart from or above the rest of mankind.

Islam cannot and must not be imposed on any one nor should the human race be classified into inferior and superior ranks. Muslims do not entertain the concept of favoured and condemned nations or endorse the doctrine of the Chosen and the Gentile. Muslims are commissioned to convey the Divine Message to mankind and to make their indispensable contribution to humanity. In other words, Muslims cannot afford to be indifferent, exclusive, or arrogant.

It is their solemn Islamic duty to open wide their minds to all realities of life and stretch far their arms to all people of whatever class, creed, race, or nationality. The good that they can do and the services they can render will fully materialize only when they put Islam into practice and associate with other people in a kind, humane spirit of Islam.Islam is the Din of Haqq, it gives freedom of a very high degree in abundant measures and frees the mind from superstitions and fills it with truth.
Islam frees the soul from sin and wrong and quickens it with goodness and purity. Islam frees the self from vanity and greed, from envy and tensions, from fear and insecurity. Islam frees man from subjugation to false deities and low desires, and unfolds before him the beautiful horizons of goodness and excellence. Submission to the good Will of Almighty Allah Subhanahu Wata’ala, together with obedience to His beneficial Law, is the best safeguard of peace and harmony.
In view of all these circumstances, as dedicated Muslims, we must make a fresh introduction to Islam. It is not our intention to become blind fanatics or narrow-minded people because Islam is strongly opposed to such things. We must re-acquaint ourselves with the Truth and with the great beauty of Islam in order to provide ourselves with the spiritual insight into the universe and a moral approach to the human condition.

Once we realize this, it will make us responsible citizens of our respective countries, honorable members of the human race, and above all else, Allah-minded people. Does the picture I have drawn here mean a pessimistic outlook on the future of Islam in the modern world? Or is it a brave confession of the despair and helplessness to which the Muslim Ummah seem subject? Or is it a reflection of the expected outcome of a losing spiritual battle that the Muslims are fighting all over the world today? Certainly not!

Pessimism and despair are contrary to the spirit of Islam, and the helplessness is incompatible with faith in Almighty Allah Subhanahu Wata’ala. As mentioned earlier, the future of Islam is the future of humanity, and if humanity has any future – there is a great and bright future in store for Islam. At this stage it is imperative for Muslims to set the records straight. There are still some very ignorant people who continue to call our religion “Mohammedanism” and refer to us as “Mohammedans”.

Beyond that, the philosophy of love as a basic motivation is not new, but in our times most people do not seriously embrace it. It extends across religion and race, hence the importance for its adherents to reach out and join one another. It is a need felt by all of humanity. Yes, the world could change. But that will never come about without diligent, selfless effort on the part of those who believe in its importance.

Alhumdulillah! There are promising signs on the horizon these days, despite the encompassing darkness, evil and gloom, of a return to the sanctuary of Islam being manifested in all parts of the world. The return of the remnants of a vilified, defeated, fugitive, stereotyped and scattered people, weakened by exhaustion while panting after banners alien to the true spirit of Islam and the Sunnah of Almighty Allah’s Beloved Nabee Sallallahoo Alayhi Wasallam. People everywhere are returning to the sanctuary of Islam whose sanctities were violated when they separated themselves from it, and to the banner whose majesty ceased when it was abandoned.
They return to Islam calling out its name in every place, seeking from it honour, dignity, justice, freedom and security. Allah be praised! These are indeed hopeful signs. This is an indication that the Muslim Ummah has found itself, after being lost and having gone astray, and that it is echoing one call emitted from their innermost being without dissimulation or pretence. Amidst all this, one united cry echoes in all parts of the world, calling to the banner of Islam, crying out for Islamic unity and brotherhood. It is call coming from the innermost being of the Ummah, from quarters expected and unexpected.
The Muslim Ummah have reached a stage in their history where it is of the utmost importance to bear in mind that the Most Holy and Glorious Qur’an was sent by Almighty Allah Subhanahu Wata’ala for a definite and specific purpose. We should not cast aside or disregard its metaphorical language without searching for its divine reason and meanings, for Almighty Allah Azza Wajjal does not waste words or use them idly. He blessed us abundantly with His  Mahabbah and gave us His Din, His Book and His Beloved Nabee Muhammad Ibn Abdullah Sallallahoo Alayhi Wasallam as a clear guidance for life on this earth and for the life awaiting us in the Aghirah.
As the present tidal wave of Islamic awakening spreads throughout the world, the forces hostile to Islam are slowly been driven to great despair. Amidst all this Fithnah, hatred and turmoil confronting humanity today, one united cry echoes all over the world calling for Islamic unity. It is the great awakening…..it is the guidance….it is the light….it is the conscience of the Muslim Ummah that has awakened and is guided and illuminated. It is no longer the call of an individual or an organization. It is the voice of the heavens descending once again onto the Doonya.
Alhumdulillah Hi Rabbil Ala’meen! There are promising signs emerging on the horizon, despite the encompassing darkness and gloom. Allaho Akbar! Allaho Akbar! Allaho Akbar!

And Peace be upon those who follow the Guidance.
The Truth is from Almighty Allah; the errors are all
mine and I stand to be corrected.

Please be advised that you are more than welcomed to use and share
my Khutbah’s for propagational purposes without my prior consent.