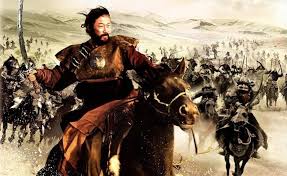 Beloved Ummatul Muslimeen! From the very inception of its career on this planet, Islam had been singled out for such fatal attacks as no other religion would have been able to withstand. There have been religions which had once conquered the then known world but they could not survive under an offensive much less serious than Islam had to face. Unlike others, Islam not only overcame all its adversaries but was successful in maintaining its orginal form and purity.

If, on the other hand, Assassins posed a grave internal danger for the faith and spirit of Islam, the onslaught of the Crusaders and invasion of the Mongols on the other, were sufficient to efface it completely. Had there been any other religion placed in such an inviable position as Islam, it would  certainly have lost its soul and today we would have had to look for it in the pages of history.
Alhumdulillah! Islam, however, not only survived in the face of all these internal and external threats to its very existence, but was also able to gain victories in entirely new fields. Islam was continuously called upon to resist the onslaught of innovations, deviations and misguided interpretations of the Most Holy Qur’an and the Sunnah, foreign traditions, heretical rites of the worship of saints, relics and tombs, speculative thought, materialism, epicurcanism and godlessless, and, indeed, it sometimes appeared as if Islam would not be able to weather the storm, but the conscience of its followers always refused to strike a compromise with the evil, and Islam emerged triumphantly on every occasion.
This article shows what  ordinary people can accomplish in times of great trials and tribulations. Islam was about to be submerged in the whirl-pool of the Mongol ardour of slaughter, hatred, destruction, and annihilation.
When Islam  Almost Vanished.
The genocide lasted decades. Historians said that the  world had never seen murder and destruction on such a massive scale. Millions  died and those left alive often longed for death. People openly wondered whether  the light of Islam would be forever extinguished. But the course of history changed through some of Almighty Allah’s most unassuming servants. In the thirteenth  century a tidal wave of devastation swept over the Muslim world.
City after  city, region after region disintegrated amidst death and destruction from a storm of iron and fire. The  death toll inflicted upon the Muslims was incredible. In 617 A.H. Samarkand, Ray, and Hamdan were put to the sword causing more than 700,000 people to be killed or made captive. In 656 A.H. Hulagu, the grandson of Genghis Khan continued the destruction. Even Baghdad, the leading city of the Muslim world was sacked. Some estimates say that as many as 1,800,000 Muslims were killed in this awesome carnage.
Baghdad was often described as  the jewel of the world. For six long weeks this jewel cracked and shattered  under the ferocious might of the Tartar hordes. The rivers of the Tigris and  Euphrates ran red with blood. Women who had observed modest and chaste lives  were savagely assaulted and raped. Five centuries of knowledge accumulated from  every literate civilization and contained in the world’s largest libraries was  reduced to ashes. Many of humanity’s greatest centers of education, commerce and culture became nothing more than killing fields.

The architect of this  colossal avalanche of death was Genghis Khan. His barbaric legions were  triggered into a forty year bloodlust through the folly of the Muslim ruler,  Muhammad Khwarizm Shah. Once a powerful and mighty monarch, Khwarizm Shah ordered the execution of Mongol caravans that came to trade within his kingdom.  When Genghis Khan sent a delegation of envoys to lodge a formal protest, Khwarizm Shah executed most of them. These two inhuman acts were avenged at the  cost of millions of innocent lives.

The Tartar Holocaust began in 1218 CE  six centuries after the death of our Beloved Nabee  Muhammad Sallallahoo Alayhi Wasallam. It  moved westward from Mongolia across Central Asia and the Persian Gulf, southward  toward Delhi and northwest to Budapest and Moscow. People as far away as Sweden  shuddered at the thought of a Mongol invasion. Muslims were so overawed by their power that one Mongol could kill over a hundred Muslims and none would dare defend himself. In Arabic a proverb sprang up which meant that if someone tells  you the Mongols have suffered a defeat don’t believe him.

On the eve of  the Mongol invasion, the spiritual state of the Muslim world was pathetic. Corruption, disunity, and materialism were rampant. Khwarizm Shah was not the  only example of insufferable leadership. The Abbasid Caliph, Al-Mustasim, was  reportedly pleased to hear of the collapse of Khwarizm Shah’s empire because of  his personal dislike for the monarch. Before the Mongols reached Baghdad, the  Caliph’s advisors had convinced him to seriously scale back the army. The city  was in no way prepared to withstand what lay in store for it.

And yet  Islam did not die. Genghis Khan who proclaimed himself as the Scourge of God,  who delighted in the rape of conquered women could not exterminate the Muslim Ummah. Within a generation the tide had begun to turn in Islam’s favour. Baghdad  was destroyed by Genghis’ grandson Halaku but his great grandson Berek became a  Muslim. In fact, Berek withdrew his forces from Halaku’s army after the fall of  Baghdad which contributed to the first defeat the Mongols suffered against the  Muslims during the battle of Ayn Jalut in 1260.

In the wake of such a horrible disaster and with the threat of the whole Muslim world and then Europe being subjected to the same fate, Almighty Allah Subhanahu Wata’ala raised up from the Mamluks of Egypt, Saifuddin Qutz, who, united the Muslim army and met the Mongols at Ain Jalut on the 25th of Ramadan. Although they were under great pressure, the Muslims with the help of Almighty Allah, strategy and unflinching bravery, crushed the Mongol army and reversed this tidal wave of horror. The whole of the civilized world sighed in relief and stood in awe at the remarkable achievements of these noble sons of Islam.
The aura of the Mongols’ terrifying invincibility was broken. Three years later Berek himself would defeat Halaku’s forces in the Caucus region. Those who tried to destroy Islam became its protectors.
The role that ordinary Muslims played in this  miraculous recovery cannot be ignored. The entire Ummah owes a debt of gratitude  to those men and women who never forgot the centrality of their faith or the  importance of sharing it with others. Berek or Baraka Khan was introduced to  Islam by
two unknown merchants. Their efforts eventually led Islam to reach  Russia and Eastern Europe.

If the Tartars are regarded as part of Islam’s  universal brotherhood today, one can thank the efforts of unsung heroes like  Jamal Uddeen. The vast Mongol empire was divided amongst the various descendants  of Genghis Khan. In certain parts of the empire, the Mongols regarded Muslims as no  better than animals while Christianity or Buddhism were expected to become the official state religion. But the sincerity of ordinary believers like Jamal was  to outshine all else.

Jamal was a Persian who was travelling through the  Middle Kingdom or Chaghatay Khanate known for its animosity toward Muslims. With  his small band of travellers he mistakenly travelled through the game preserves  of the Mongol Prince Tuqluq. Jamal was arrested and brought before Tuqluq. In his anger the prince told Jamal that a dog was worth more than a Persian. Jamal  replied, “Yes. If we did not have the true faith, we would indeed be worse than  dogs.” Tuqluq was struck by the reply. He inquired what Jamal meant by the true  faith. When Jamal explained the message of Islam Tuqluq was convinced. He asked  Jamal for some time to unite the fractured Middle Kingdom and then he would  proclaim his faith.

Jamal returned home and later fell seriously ill. As he was  dying, he instructed his son Rasheed to remind the prince of his promise when he became king. When Tuqluq ascended the throne Rasheed set out to meet him. An  ordinary person had little access to royalty and after many efforts Rasheed
risked his life to enact a plan. He called out the adhan at fajr nearby the  royal compound. He was brought before the king and invited him to fulfill his  promise. On that very morning Tuqluq Timur Khan, king of the unified Middle  Kingdom, became a Muslim.

Death and destruction are ravaging Baghdad once  more. The innocent victims of this injustice must not be forgotten. We owe it to  them to follow in the footsteps of Almighty Allah’s Beloved Nabee Sallallahoo Alayhi Wasallam, in the footsteps of ordinary believers like Jamal and Rasheed Uddeen and share Islam with each and  every human being. The beauty of our character and our sincere conduct need to  be the beacons that attract those around us to this Divinely prescribed system  of
life.