The Holy Quran uses both rhetoric and reason in a powerful way. It addresses us, the readers, not as passive consumers of information, but as critical and sentient human beings. It engages both our intellect and our innate sense of balance, fairness, reason, logic and beauty, which are gifts from Allah…”

Reason and Rhetoric in the Holy Quran

[To hear the audio version of this khutbah, please click here] 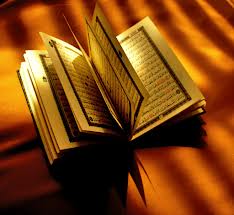 O mankind! Show reverence towards your Guardian-Lord Who created you from a single person, created, of like nature, his mate and from the two of them scattered (like seeds) countless men and women;― Be conscious of Allah, through Whom ye demand your mutual (rights) and (show reverence towards) the wombs (that bore you): for surely, Allah ever watches over you.`

My Dear Brothers and Sisters,

In a previous khutbah we looked at some examples of Metaphors and Parables in the Holy Qur’an. Today we will explore another powerful instrument of speech: the use of reason and rhetoric, which is deployed constantly throughout Allah’s Sacred Book. Here are some examples:

“Are the blind equal to those who can see? Or are the depths of darkness equal with Light? Or do they assign to Allah partners who have created [anything] as He has created, so that the creation seemed to them to be similar?” [Sura Al Ra’d 13:16]

“Say: Allah is the Creator of all things. He is The One, The Supreme and Irresistible.”

Again, further on towards the end of Sura Al Ra’d we read in verse 33:

“Is then He Who stands over every soul [and knows] all that it does, [like anyone else]? And yet they ascribe partners to Allah. Say: “But name them. Is it that you will inform Allah of something that He does not know on earth, or is it [just] a show of words?”” [Sura Ar-Ra’d  13:33]

And in Sura Az-Zumar 29:39: another example of reason and rhetoric:

“Does Man not see that We created him from sperm? Yet, behold! He stands forth as an open adversary…”

In the next two verses [78-79] the Quran poses a rhetorical question that those without faith, puffed up with pride and arrogance, ask contemptuously:

“And he makes comparisons for us, and he forg.ets his own [humble] origin and creation: He says: Who can give life to dry, decomposed bones?”

The answer comes in the Quran’s elegant, eloquent and irrefutable way:

“Say, He will give them life, Who created them for the first time! For He is well versed in every type of creation.”

These examples I have quoted show us that Allah’s Noble Book addresses its readers as sentient, articulate and rational human beings. We are not treated like cattle or sheep. Allah gave us the faculty of reason. He gave us the ability to weigh things up, to make considered judgements. Then, he presents us with a convincing argument and invites us to be the judge. He could have told us simply to believe so and so, without any supporting arguments. But no, Allah wants us to be utterly convinced, deep down, in our heart and soul, that what He revealed in the Quran is the Truth, and that the truth can stand up to any scrutiny.

Truth and falsehood are not the same. The one endures, the other perishes. When Prophet Muhammad sws re-entered Makka, he pronounced those timeless words:

“And say: Truth has come, and falsehood has perished, because falsehood is by its nature, perishable.”

Brothers and sisters, that’s a good thought to consider. Why do we concern ourselves so much with the perishable pleasures of life? We should certainly enjoy what Allah has given us, but not too much. Our lives must not be centred around the pursuit of pleasures, leaving no time and space for our spiritual development. Life’s pleasures are a gift from Allah, and we must not deny His gifts. But always keep in mind that material things won’t last, our physical enjoyments won’t last, our life on earth won’t last. When we realize this, then we will become acutely aware of the preparations we must make for Aakhira, the life after our physical death. This is the Real Life that will last forever.

“Behold, you enjoy the life of this world, but the life to come is more beautiful and longer lasting…” [Sura Al A’laa ch.87.v16-17]

Repeatedly, throughout the Sacred Text, there are invitations to use our reason and to consider, to compare and to weigh things up. The Holy Quran constantly appeals to our better judgement; it constantly invites us to reflect and to see the wisdom of Allah’s Divine Guidance.

My brothers and sisters,

There are many more examples of  the Holy Quran’s powerful use of Reason and Rhetoric. In today’s khutbah we have time only for a few examples.

In Sura Ar-Rahman, the All-Merciful, we find a constant refrain:

“Then which of the favours of your Lord will you two deny?”

The ‘two’ here refers to the human beings and the Jinn. As we know, there are beings that exist beyond the threshold of human perception, and there are both good and bad jinni. Shaytan is the leader of the rebellious jinni.

The All-Merciful therefore invites us to consider His overflowing generosity. He asks us repeatedly, which one of His favours would we deny? This rhetorical question is asked 31 times in the Sura’s 78 verses, and towards the end, we reach the punch-line, the rhetorical climax:

“Is there any reward for Good, other than Good?”

The Holy Quran uses both rhetoric and reason in a powerful way. It addresses us, the readers, not as passive consumers of information, but as critical and sentient human beings. It engages both our intellect and our innate sense of balance, fairness, reason, logic and beauty, which are gifts from Allah. So, not only does Allah ennoble us with this great intellectual gift, but He also deploys numerous tools to tease, challenge and stimulate our minds and hearts. This allows us to engage His divine message in an active, dynamic way.

Clearly the Holy Quran is a masterpiece of both style and substance. While we admire the use of so many tools of language, like metaphor and parable, rhyme, reason and rhetoric, we must never lose sight of the substance. The Holy Quran can be admired for many things, but it is first and foremost a Book of Guidance for human beings, “hudal lin-naas,”, it’s a vital road map to navigate our way through life so that we can please Allah, and reach that safe home which is Al-Jannah, His Eternal Garden. That’s the main agenda. We should never lose sight of the main goal.

My dear sisters and brothers, we must read and reflect on this wonderful gift from Allah, which is His Word, His noble Book, Al Qur’an. We must not just read it like parrots, without engaging our minds, our intellect. We must read and reflect deeply, so that it’s divine wisdom can penetrate our hearts, and marinate in our marrowbones. Allah’s Word has the power to change our behaviour and improve our conditions.

The Quran invokes our God-given faculties of reason, of common sense, and our aesthetic sensitivities, our natural yearning for beauty and harmony. The Quran is instructive, but it’s not a dreary Do-it-yourself manual. The Quran is poetic but it’s not just a book of vacuous poetry. No human mind is capable of matching the Quran’s eloquence, and for 14 centuries its challenge, in Sura Al Baqara, [2:23] has not been beaten:

“And if your are in doubt as to what We have revealed from time to time to Our servant, then produce a Surah like it, and call your witnesses of helpers besides Allah, if your [doubts] are true.”

The Holy Quran is its own miracle, standing by itself unchallenged in 14 centuries and will certainly keep its promise until the end of time. Allah’s Word is pre-eminently The Book of Divine Guidance, valid for all times and all places, inviting us to explore its depths and to find the gems of wisdom that will light up our own journey through the darkness of our own lives.